You are here: Home / Pets and Animals / Monday Matters- Dress Your Pet App Benefits Blue Cross Animal Charity
Welcome to Monday Matters where I spread awareness to help important causes and where you
can start your week off right by making a difference each Monday, even
if that is just to pin, tweet, or share to pass this information on.


What if you could do it without tormenting your pet and support a good cause at the same time?

(This Pet Parade has nothing to do with my Pet Parade Blog Hop, that will continue as normal.) This is an app for virtually dressing your pets and showcasing them online. The app is free to play around with dressing your pet. There are tons of fun accessories to choose from and it’s really easy to use.

Each vote is a donation to Blue Cross Pet Charity!

Money raised will help sick, injured and abandoned pets. Blue Cross Animal Charities has been helping animals in need since 1897!

You can click on either of my cats’ pictures in this post to vote for them and donate to the cause.

The pet who gets the most votes will be crowned the winner, and the
results will be announced on the Pet Parade website on March 9, 2014!

I introduced the Pet Parade last week and included a video with details on Virtually Dress your Pets- Pet Parade App.

Friday the app launched so, of course, I tried it out!

It is easy to use and share. And fun to pick from all the accessories available!

The only downside is you can only enter one pet per account and additional accounts would need a separate email. I uploaded
Rocco’s pic before realizing this, so he’s also listed under the name
Rascal on the parade. I did email about that and hopefully they can
change it in the future. Most of us have more than one pet! Some many more!

I also realized, Rascal and
Rocco should switch outfits! Their personalities would be more fitting
in the others’ attire. Oh well, they both look amazing.
After I got the hang of it, I hosted an hour of the all day Twitter launch party #24hourpawty.

Are you paying attention?

I hosted a Twitter Party for the first time ever!

I’m not very Twitter savvy, though I’m getting there. I was super nervous just before the #PetParade Party started! I’ve joined a few Twitter chats previously, but I hadn’t found a good way to keep up with them. I’ve tried different platforms designed for chats, but still seem to get lost in all the tweets and overwhelmed. Or, most annoyingly, my stream won’t update fast enough and I’m a minute behind the conversation! In this day and age, a minute may as well be a day!
This time I tried Twubs to follow the chat and it worked pretty well! I was even prepared with some questions to ask in case my mind went blank, but it was a good turn out and conversation began to flow naturally. My anxiety melted away and it was actually super fun! I enjoyed meeting new animal lovers and being my silly self.
I’ve been dubbed a #ppchamp for spreading the word about the app. That means I’m in the Pet Parade Champion Club, but I’m not really sure telling people I’m a “ppchamp” sounds like a good thing! Not the most awesome title I can think of. It was a nice gesture. Maybe I really should be proud and shout it to the world?

Thank you all who joined!

I hear there will be another Twitter shindig with #petparade, some sort of festive pawty, happening on Dec 31st, so stay tuned. I’ll update when I hear details. 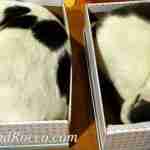 You may think a cat is a cat, but there many different cats just … END_OF_DOCUMENT_TOKEN_TO_BE_REPLACED

Thanksgiving is such a wonderful holiday. We need more days to … END_OF_DOCUMENT_TOKEN_TO_BE_REPLACED