You are here: Home / Pets and Animals / Heartworm Symptoms in Cats – What You Need to Know

Probably everyone who owns a pet, whether it is a cat or a dog, has heard of heartworm disease and possibly wondered how to determine heartworm symptoms in cats or dogs. It is, essentially, worms inside of the heart, which as you can imagine, will cause all types of blood circulatory problems. For dogs, if left untreated, it is almost always fatal, but for cats, it’s a different story. Not that the disease isn’t serious and can cause major issues, including death, but heartworms don’t really get along well in the bloodstream of cats, and that’s generally a good thing.

But, before we get into any details about the ways and means of heartworm and heartworm symptoms in cats, let’s first understand how it even affects cats in the first place.

Where do Heartworms Come From?

Yes, that’s where it all begins, with the mosquito. Baby heartworms are transmitted through a mosquito bite into the bloodstream of a dog or a cat. A mosquito first bites an infected animal, from coyotes, ferrets, wolves and other creatures may already have infected blood which the mosquito drinks. When a mosquito lands on another animal for a blood meal, the microscopic baby heartworms from the previous meal are transferred into the new bite wound. Once inside of a new host, It takes approximately 6 months before the larvae become adults, and that’s when the real trouble begins.

In dogs, heartworms travel through the blood and wind up directly into the heart muscle. There may be several hundred heartworms inside of a dog, and you can understand the trouble they would cause by restricting blood flow, damaging arteries and usually killing a dog if left untreated. But for cats, it is an entirely different disease.

Since heartworms are genetically made to infect dogs, they don’t do so well in cats. A cat’s body rejects heartworms, and very few, if any, survive until they reach adulthood. If heartworms do survive, only 2 or 3 may take residence in the heart of a cat, unlike the hundreds that would infect a dog. In most instances, even if your cat is infected, you may never know and there may be no lasting problems. However, some heartworms may actually make it to adulthood and live within a feline’s heart. When this occurs, here are some of the things to look out for that may give you a clue.

The Cure for Heartworms

Here is where it gets tricky. Unlike dogs, there is no drug that can kill heartworms in cats. Heartworms are not the same as tapeworms or roundworms; click here for more info on the best cat dewormer. The best that can be done with a severe case of heartworms is to operate and actually remove the heartworms by hand. Although an expensive and taxing procedure for both you and your purr buddy, you may not have a choice. But don’t get disheartened at those thoughts, because as they say, cats have 9 lives.

In the vast majority of cases, cats can be stabilized and monitored by you and your vet while the cat’s own body takes care of the problem itself. Drugs can be given to combat any symptoms of discomfort, and since heartworms don’t have a long lifespan in cats, the chances are great that if your cat is infected with heartworms, they will eventually die off without any medical help.

The only real way to keep your cat from getting heartworms is through prevention. Like they say, an ounce of prevention is worth a pound of cure, and in this case, those words ring true. There are heartworm tabs for cats that can be administered once per month, and the formula will kill off any larvae that make it inside of your cat’s body. Although all cats are susceptible, outdoor roaming cats have the most chance of becoming infected.

Heartworms are in all 50 states, with a greater concentration of infections in the warmer parts of the country, with most cases reported during the summer months. Prevention is the key to controlling heartworm for a happy and healthy cat all year long.

Mary Nielsen founded FelineLiving.net and is a passionate cat lover, blogger, and part-time music teacher. She founded her blog to share her ups and downs of being a pet parent to a bunch of adorable kittens and cats. When she is not playing with them or teaching, you can find her experimenting in the kitchen.

Has your cat or dog had heartworms? Do you have any additional advice to share? 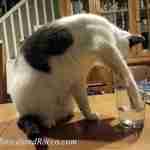 In my house, you don't leave a water glass … END_OF_DOCUMENT_TOKEN_TO_BE_REPLACED